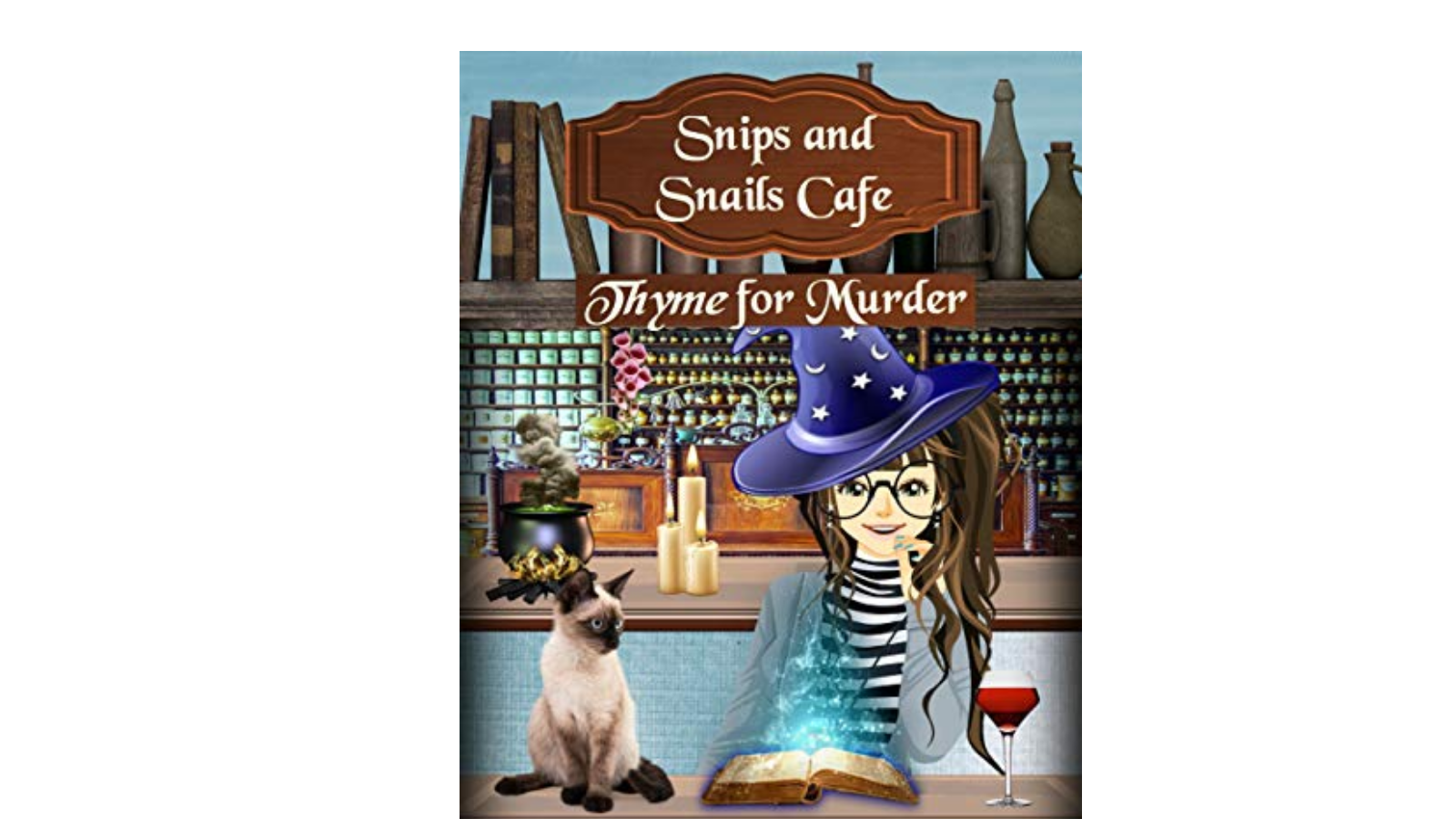 Sign up to Snips and Snails Cafe Newsletter and receive important updates on Upcoming Releases and Bonus Material. You will also receive the Prequel to the series, Thyme for Murder, Free!

Thank you for subscribing!

Look for a Link to your Free Novella, Thyme for Murder, in your inbox Soon!

It's Great to have you here. 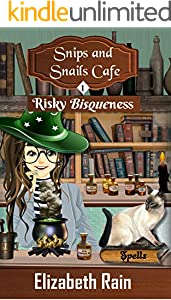 Getting older shouldn't be a long downhill slide into obscurity. It should be the other half~The Best Half...

That's what Julienne Mason told herself as she stared at herself in the mirror the morning after her 40th birthday...

Julienne Mason's Ego has taken a Beating. In the space of a day, she nearly burnt down the pizza parlor, lost her job, and walked in on her cheating rat of a husband.

With nothing to show for a lifetime of chasing the Joneses and trying to conform to everyone else's expectations but her own...Juli is more than ready for a change of lifestyle. But nobody ever told her that answering the summons to a strange letter would turn her entire life on a dime, and challenge every notion she's ever had on what normal is...

Add in a Strange Inheritence, an Overbearing Ghost, A Snobbish Talking Cat, and a Sentient Recipe Grimoire; Sprinkle Liberally with Magic...

And Maybe even Misfits like her deserve a second chance to get things right...

But first she'll need to solve her Uncle's Murder and learn to Embrace her inner Witchiness...before she runs out of time and the killer Strikes Again... 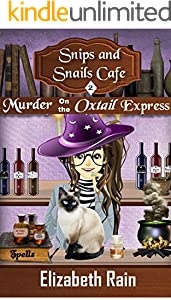 As the Newly Appointed Resident Soup Witch in charge of Snips and Snails Cafe, it's Juli's job to make sure the Soup of the Day delivers...a daily dose of magic that is...

Life after 40 can be a challenge...what with too many gray hairs to pluck, all the sagging and bagging, and a faulty internal temperature control...

When Mr. Fried and extra crispy shows up in bed at the local Retirement home and they flag her good friend Jacob for the crime, Juli decides to take the case.

...and then they realize they have the wrong guy...

The real resident is missing...and the identity of the victim is a mystery...

And someone isn't too keen on Juli solving it...

Murder on the Oxtail Express 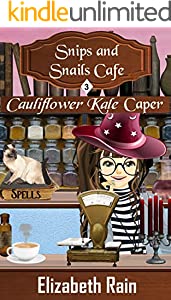 Life for Veil Fall’s very own Resident Soup Witch, Juli Mason, is looking up. Snips and Snails is a raving success, there’s Romance in the air for her and Jack, and she has solved her first two murders. Proof positive that life after 40 doesn’t have to be slippers and her favorite soap opera. Instead, she’s reinventing all her best girlhood dreams…with a touch of Magic.

She should have known better.

Because now there's a dead body in the pantry of Lovelace Resort.

Is he the hapless victim of the fastidious chef because he didn’t do the dishes?

Or was his death the result of a million-dollar heist gone wrong?

…If that’s not complicated enough, Grams’ sister Annabel is sending her distressing messages asking for help from beyond the grave…

Before she knows it, Juli is on the case, Chasing baddies, finding clues, and whipping up the right magical recipes to save them all. 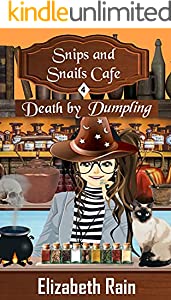 Juli Mason hired Bertie the Bag Lady, living in the alley behind Snips and Snails, out of desperation.
It was a smooth move.

Who knew Bertie would clean up so well?
… Or that she was in actual fact, a Sous Chef with serious skills in the kitchen?

But the star Cook of Snips and Snails Café is not all she is.

When the Hat River in Veil Falls coughs up a wrecked Cadillac Sedan beneath the Fae Road Bridge and Bertie Faints at the news...Juli smells a mystery...

Perhaps it's the body they found floating on the floor of the front seat, or the second in the back.
Is it murder most foul, or an unfortunate accident? And why do all the clues point to Bertie?

Add in the rude new birdwatchers that have checked into Lovelace resort, and the discovery of what was once missing...
Is Bertie's strange behavior and the guest's unexpected arrival all just an odd coincidence?

There's something strange going on in Veil Falls. It's up to Juli Mason to solve the case...or the results could just be murder. 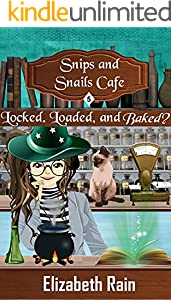 What happens when Teenage Hijinks turn into Murder?

When the latest in a slew of Dumpster fires at the local campground turn up a finger and a ring, Jack Lovelace smells a corpse...and a job for his girlfriend Juli...Part-time Detective...Full-time Soup Witch at Snips and Snails Cafe...

...and then they find the second grave.

Is there a Serial Killer Loose in Veil Falls? Will they find the culprit before a new grave is dug for the next victim?

There’s Spells to learn, Ghost’s to tame, and a Smidgeon of Romance in the air for Juli and a certain hunky Fire Chief…

But first, she’ll need to get cooking. If she’s to survive what’s coming, she’ll need a new kind of Hero. And she has just the right recipe to conjure one up… 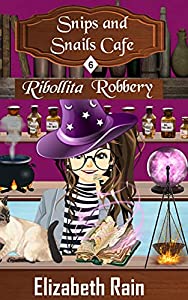 The Gloves are off, or is it hats? in Veil Falls

As Election Time nears for the next Chief of Police, sides will be taken, forces will gather...

And Juli, resident Soup Witch, and owner of Snips and Snails hopes for a break from the plague of Murders she's been tasked to solve since she moved to the little Magical town in the Upper Peninsula of Michigan almost a year ago.

But someone has an axe to grind with Jerry Watson, who has the popular vote in town, and is favored to win by a landslide come election time.

There's the rash of mean graffiti all over town, smearing Jerry's reputation and making him look like a poor second candidate to the standing police chief, Larry Jokerbridge.

As if that isn't enough...someone has robbed the First and a Half Bank...and left a calling card behind...

Who is the dead body in the vault? And why does the murder point to Jerry Watson?

If Juli doesn't want to visit her favorite sheriff in prison and have 'The Joker" around for another four years, she'll have to get busy, find the real killer, and clear Jerry's name. 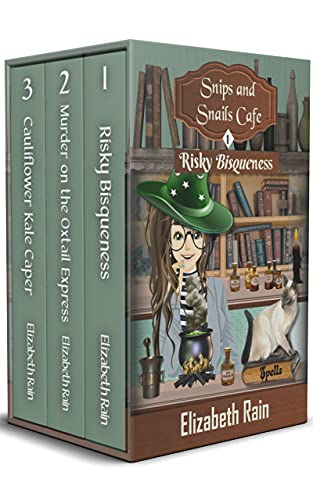 Get the Boxset with books I-III and Save...

Juli is on the case, Chasing baddies, finding clues, and whipping up the right magical recipes to save them all.

You have Successfully Joined!  An email with the link to your FREE book should be arriving shortly.

If it doesn't arrive soon, check your spam or promotions tab and snag that puppy out. Then follow the whitelisting instructions so you get the mail you asked for...